On Saturday May 25th, 2019, Memorial Day Weekend, I put on a Tactica II game at the NHMGS Enfilade Convention in Olympia, WA. The contenders were some Trajanic Romans vs a Barbarian Warband German Army. The Army Lists are shown below. I had to make some substitutions to flush out he armies, the Germans outnumbering the Romans by 354 points.

Having used all my Roman figures, I had no extras to even up the points with. So I added some allied Armenian Cataphracts and lower grade Auxilia armed as Legionnaires(using my Pontic imitation Legionnaire figures). The Germans outnumber the Romans slightly in Heavy Cavalry, but the Romans are better quality and they have some Light Infantry Auxilia to help out. The Germans have over one and a half times as much Heavy Infantry as the Romans, but again it will be a battle of quantity vs quality. Also the German warbands get Impetus, which can give them double dice in melee if they pass their Control tests. 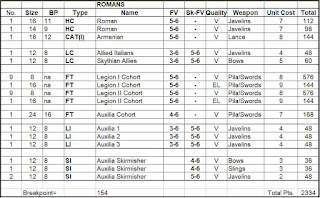 German players discussing strategy. Both sides made three rolls for terrain per the rules. Germans got a small rise(which they deployed in the middle), a flank piece of Rough ground which they discarded and a patch of Clear terrain. Romans rolled up two patches of Clear terrain and one Gentle Rise which they chose not to use. Rules say you only need to take one of the rolls. 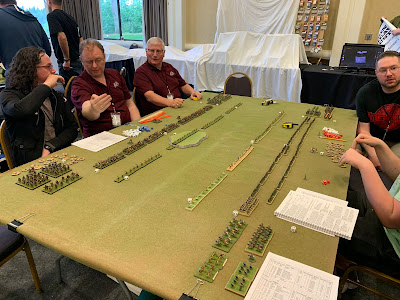 View from the opposite of the table. Germans out two HC and a LC on one side and 2LC and a HC on the other. Romans have a HC, a LC and a LI on each flank plus the Cataphracts on this near flank shown below. Romans are shown deployed in individual Cohorts. They elected to deploy them "reinforced" before the game started 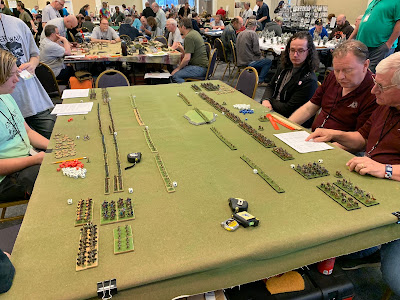 Chris Leach att the far end graciously helping out with coaching the players. He played in a Greek vs Persian Tactica game the previous period. Roman Cohorts are shown "reinforced" in this photo. Neither side wanted to advance, electing to use their skirmishers to try and whittle down their opponents before committing their main force. The Germans eventually did advance with their cavalry wings, more so at the far end where they had an advantage. 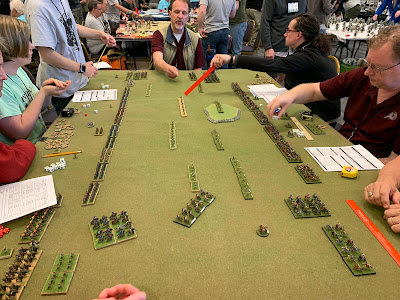 This photo is almost two hours after the previous one. I was too busy running the game and forgot to take pictures. The game had been fairly even to just before this point. At the far end the German heavy cavalry are just about to rout the last Roman flank unit at that end. At this end, the opposite is true. There is one German Heavy Cavalry unit left being ganged up on by Roman HC and the Cataphracts.It held on surprisingly long. The big story is further down the line where there is a gap in the units. See next picture for explanation. 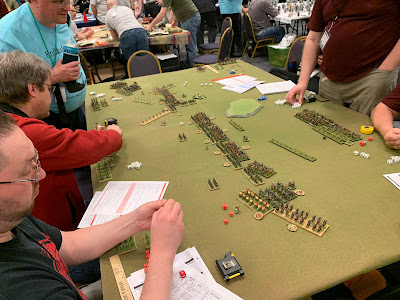 Here you can see a big gap in the German line. What happened is this. The German player attached his General to a unit to bolster his dice(you get two extra dice for an attached General, but there is a risk). His unit took three melee kills. When such an event happens you roll for the General and anything but a six and the General survives. He rolled a six! Then you roll a Control Test and he failed that leaving the Unit disordered. Being disordered you only roll half your dice and if out scored in any melee area you roll another Control test, a failure resulting n unit routing. Of course he failed forcing the adjacent units to test morale the one to the right of the gap failed. 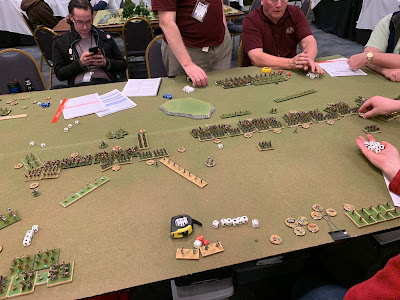 Meanwhile on the Roman left flank we see the German Heavy Cav about to rout the remaining  Scythian Horse Archers. Onre of the Roman Cohorts has routed leaving a gap in the line, but the Cohort to its right has apparently failed its Panic Control Test and is Disordered. The Roman Auxilia Cohort is still alive at this point and you can see one of the German Warbands has been flanked by a Roman Cohort from the gap created by the demise of the German General's routing unit. 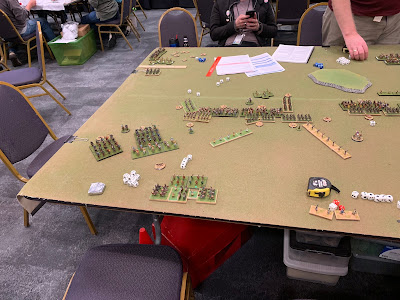 Looks bad for the nearest Roman Cohort being flanked by German Heavy Cavalry, but the cavakry unit ended uo 1/8" short of contacting. This was the last move of the game as the game ended after the melee phase. 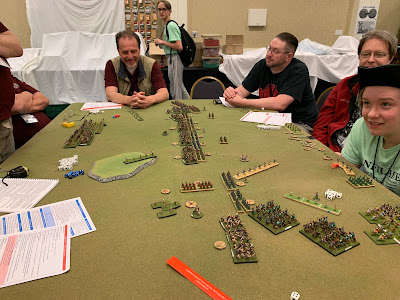 This is a marked up photo to show the remaining units. Legion 1 has losy four Cohorts, Legion 2 has lost two. The Germans have lost three Warbands. 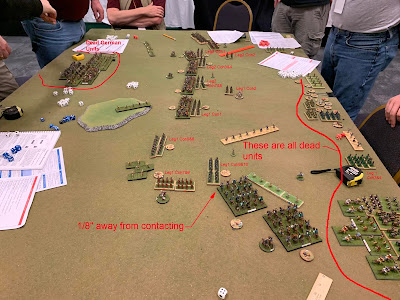 The shows the Roman right Flank. The German HC Unit is gone, its loss pushing the Germans over their BreakPoint the loss of their General also contributing 10 points toward breaking. 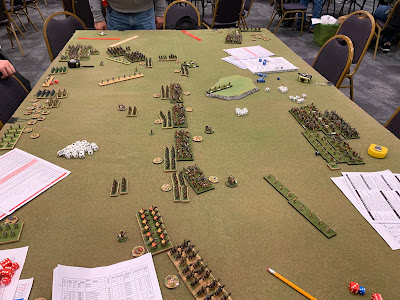 A clear Roman Victory, but it was closer than it appears. Many of the Cohorts were near breaking having survived some Warband attacks with Impetus. Lesson to be learned, don't attach you General early on in the battle. Save him for later on when he might make a critical difference.

If you think you would like to try Tactica II, the rules are available from On Military Matters
http://onmilitarymatters.com/pages/dfcatalog.php?period=0900
Item 1-16660 Conliffe, Arty
Posted by Mitch Berdinka at 6:05 PM

Rather nice looking game. Thanks for posting. I have recently purchased the rules and have tried several experiments, but nothing like the mega-game you hosted at this event. Being a student of Armati, I found myself tempted to tack on several amendments or adjustments to the rules-as-written. Have not set aside the time, however, for further testing. Again, nice looking wargame. Cheers.
Chris

Good stuff- thanks for posting, Mitch. You've reminded me that I need to clear some time (badly needed) to write a a overview of the rules for publication in "Slingshot".

Good to hear from you Paul. T-2 is still an epic set of rules. In this game we had several instances of units passing their "Fates" test at critical times. I think it was the Roman Scythian Light Cavalry who passed a "Fates" test allowing them to hang on one more time thereby delaying the German HC from being able to charge into the Roman Legion flank. You saw above how the HC ended up 1/8" away. Always a lot of fun with these rules. Arty is encouraging me to develop some smaller scenario based games rather than set piece battles,If you have any ideas for those,please pass them along.

The Glasgow group tried some scenarios a while ago - I’ll be seeing them later in the summer, so I’ll see what they have.