Well my two table Sharp Practice Scenario previously presented here, went well at the NHMGS ENFILADE Convention this past Memorial Day weekend. It achieved the result  of keeping everyone occupied and busy the whole game. Was a bit chaotic and I could have use some help running the game, but the played seemed to enjoy it.  The outcome was a bot mixed however and wargamers will always find a way to break any scenario.

The background to the Scenario is that the Rebels have made a raid into British territory and made off with a wagon load of arms and ammunition needed to arm the local Militia. They are being pursued by a force of British and must make it across a bridge to escape. Another Force of British is arriving in front of them to block their access to the Bridge. The British also need the arms to give to their  own loyalist Militias. A river runs between the two table and is impassable terrain, so the only way to escape is across the bridge.

Since the previous Scenario presentation, I resided things a slight bit. I added another unit of skirmishers to each side so the players on each side and on each table would each have two units to command. I moved the terrain around slightly to allow units to deploy into line on the road on Table B. 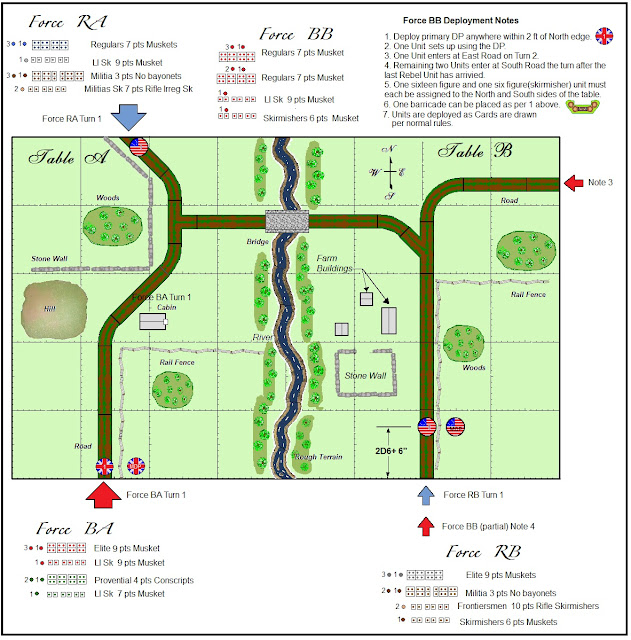 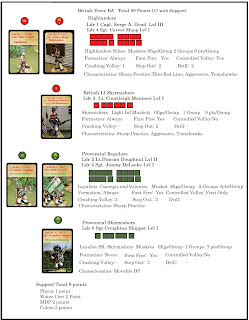 I made Rosters for each force on each table with pictures of the Leaders matching the card decks. This way, players could find their leaders and units more easily than if they just had numbers. Even so, some players still got confused and mixed up leaders. 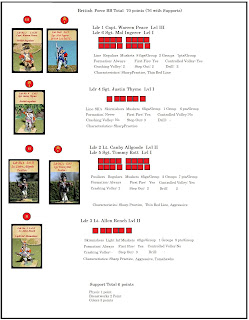 I also had cards for the  wagon Master Walter Sobchak, the two Reverends, one on each table on the Rebel side, (Rev. Hal E.Looya and Geven Brimstone) and the two Doctors on the British side,one on each table. This was to allow them easier activation in case the Force Commanders(Ldr 1) card didn't come up during play. I also use a Second Tiffin card to help keep things moving. If any Tiffin came up first, it would signal an End of Chapter per the Rules.  I've found the second Tiffin helps even things out a bit especially in Convention games. 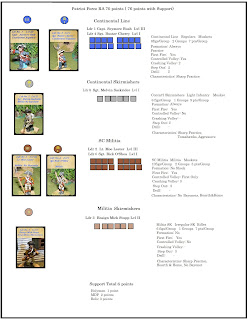 Finally, I added some rules to provide a chance of the wagon blowing up if hit by gunfire. They were as follows:

If Wagon is in line of fire or within 4" of a target receiving fire, then there is a chance the wagon will be hit. Count the wagon as another unit sharing dice and allocate hits against it. If any hits roll 1D6: 1 hits Driver, roll on Officer Hit table for effect; 2-3 hits a horse = minus 1 pip on movement dice for each hit; 4-5 hits wagon with No effect; 6 hits Gunpowder blowing up and affecting everything within 6" radius. Roll for each figure on Table 11 (Hit Effects) as if they were in the open and counting Any Shock as doubled.

I made sure both sides knew that preserving the weapons and ammunition on the wagon were a high priority for both sides. 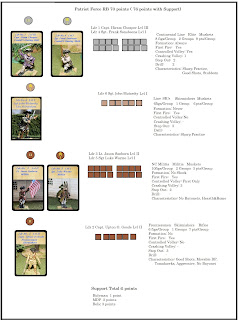 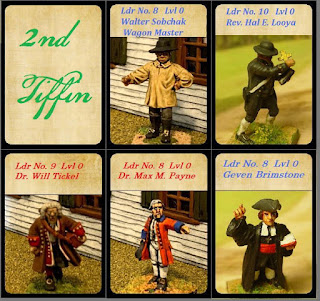 I was pretty busy running the game so didn't take a lot of pictures. In the picture below the near side is Table B. The British Regulars are occupying the blocking position on the road. It was awhile before they had any help from their accompanying skirmisher unit that was supposed to arrive on the road in the foreground on Turn 2. The Rebels used their MDP to deploy their Frontiersmen Riflemen up by the white cabin and they began to pour effective fire into the British Regulars for most of the game.. 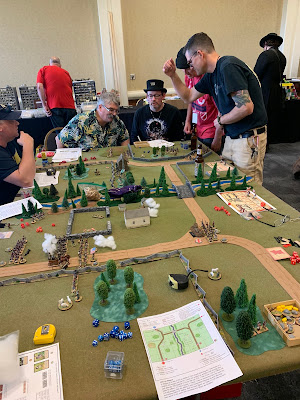 For some reason the Rebels elected to use their Main Deployment Point to deploy the Wagon and the rest of their Forces. The close pursuing British Grenadiers managed to give them some fire into their rear causing double Shock, but with the help of the Reverend Hal E.Looya they Rebels were able to recover. Where the Wagon is shown is about as far as it got. The Wagon Master, Walter Shobchak shared the hits on the Militia ans was knocked out. He recovered on his next activation, but was hit again later and killed. Why the Rebels didn't deploy the wagon using the MDP is a mystery to me. 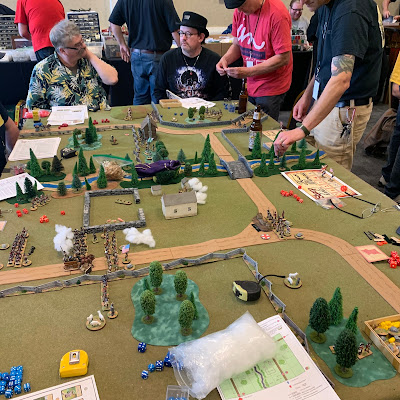 On table A the Provincial Regulars went up the right side of the table and ensconced themselves behind the log cabin where I guess they thought them selves safe there leaving their skirmishers to carry on the fight. They eventually came out from behind the house, but not before the Highlanders had pretty much carried the day on the left side of the field. They had become engaged in a firefight with the Continentals and a Fisticuffs which drove the Table A Rebel Force Morale to Zero. 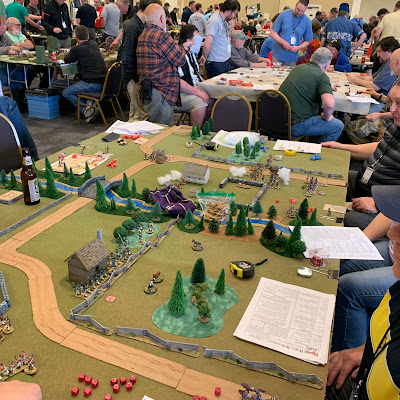 Meanwhile on Table B, The Rebel Militia along with the Frontiersmen skirmishers had whittled the British Regulars at the Road Block down to three Soldiers plus Sgt. Mal Ingerer and Captain Warren Peace. The Rebel Continentals on this side had effectively held the Grenadiers off from capturing the wagon and British Force Morale was down to two. 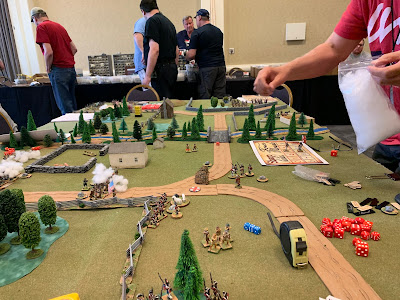 So the wagon could have probably gotten across the Bridge if the Rebels could find a driver for it, but once there, it had no where to go since the British had driven off the Rebels who were supposed to hold the bridge open. Perhaps that is a scenario for another time where the Rebels try to force their way through the Highlanders and the reluctant Loyalist infantry on the other side of the table. 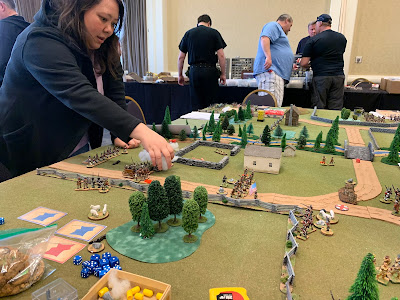 So ends my attempt to run two separate games at one. It certainly kept everyone busy, but it was very difficult to umpire. If some of the players were more familiar with the rules it would have been a lot easier. Overall I was satisfied with the result and the players seemed to enjoy the game.

Very Interesting and inventive game. I stumbled across your original blog entry (by means of a post on TMP), discussing the concept and really enjoyed reading it and the two follow-ups. I love running SP AWI games and you've come up with some great ideas (some of which I will steal :-) ). I don't think I'm up to the two table concept as a gamemaster though, but I like the idea of getting more players involved. Thanks for posting.

I always appreciate getting comments on my scenarios and blog posts. Glad you enjoyed it although this one was rather short. I somewhat behind on my posts as I have several games to get to, but they will probably end up being on another Blog which I will post a link to. Doubt if I will do the two table game again. It wore me out.